Premiums are determined by a combination of a home’s replacement value and its closeness to a high-risk vault.  For Northern California homeowners, some of the most valuable real estate in the country lies in an earthquake zone.  This makes the purchasing of earthquake an expensive, financial dilemma.

Originally, the CEA (California Earthquake Authority) was set up after the 1989 Loma Prieta and 1994 Northridge earthquakes to help provide low-cost insurance after many of the property and casualty insurance carriers pulled out of the marketplace following the quakes.  According to the CEA, the average earthquake insurance premiums statewide rose from about $540 a year in 1998 to $830 in 2005.  The CEA instituted a decrease in premiums, but they have been rising ever since 2014.

The average figures don’t really illustrate the cost in some of the highest-risk and most populated areas.  The average premium in 2014 on earthquake insurance for homeowners in the San Francisco County was $2156, it was $1806 in Alameda County, and nearly $1000 in the Los Angeles County, according to the CEA.

In contrast to Florida, which hurricane insurance is mandatory, earthquake insurance is optional in California.  As premiums have gone up, more homeowners have opted out.  The number of earthquake insurance policies in California has dropped to just 10% of homes statewide, down from 34% in 1994, according to RMS (Risk Management Solutions), a Newark, CA. based company, who provides catastrophe risk modeling solutions in the United States and internationally.

Newcomers to the Bay Area who haven’t experienced an earthquake are turned off by the insurance price are partly responsible for the low numbers of home buyers signing up for earthquake insurance, according to RMS.

Another “Big One” will Strike

As the CEA sees it, there is a huge “Insurance Gap” in the Bay Area of more than $600 Billion as of 2014, assuming the $690 Billion in reconstruction costs, and having only about $90 Billion in earthquake insurance in force as of 2014.  The CEA says it has the ability to pay $12 Billion worth of claims.

A 7.9 magnitude quake (the estimated size of the great San Francisco Earthquake along the San Andreas fault on April 18, 1906), in the Bay Area could potentially cause as much as $200 billion in damage and $25 billion in insurance claims, and have a regional and national impact as bad as Hurricane Katrina, according to RMS.  The CEA, on the 111th anniversary of the 1906 earthquake, said it would cost about $555,000  to rebuild a single-family home in the 9 county Bay Area if a similar-size earthquake struck.

The Hayward Fault runs much wider in the East Bay, and directly under the University of California at Berkeley’s Memorial Stadium (which was upgraded to be more earthquake resistant in 2012 at a cost of more than $300 Million).  Both RMS and the USGS predict that the Hayward Fault is more likely to experience an earthquake of a 7.0 magnitude.  A quake of that magnitude could severely disrupt the Port of Oakland, one of the West Coast’s biggest ports alongside Seattle and Long Beach, CA.  The real big concern is the Hayward Fault because its got the highest population density, and its heavily industrialization.  The Bay Area has added nearly 8 Million new residents since 1989 and has seen the value of its residential real estate has go up 50% to $1.2 Trillion in that time.

Invest in your own home

There are other theories who say given the sizable deductible for most of the insurance policies that are offered through the CEA, or elsewhere, that it makes better sense for homeowners in the most vulnerable areas to better spend monies by upgrading their home seismically.  Providing you can qualify, CA state homeowners can qualify for the CA Residential Mitigation Program’s Earthquake Brace and Bolt Program which offers up to $3000 in financial incentives to help pay for a seismic retrofit in the most quake-vulnerable zip-codes. 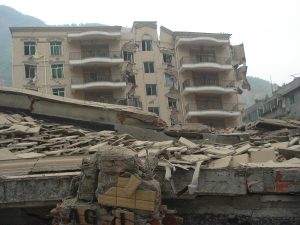 The dilemma on whether to take out earthquake coverage will continue for the CA homeowner.  With the debate of the high costs now versus receiving benefits in the future for this inevitable event.  Where were you when the Loma Prieta and Northridge quake struck?  A good result from the past earthquakes led to stronger building codes, more awareness of drills, and planning.  But, do you really have an increased urgency about taking out Earthquake coverage.

What to do next?

“Marketplace: Why Most California Homeowners Don’t Have Earthquake Insurance”, by Daniel Goldstein